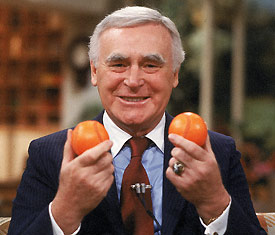 ERIC: The You Stink! team owners’ Hall of Shame has a new spot reserved for Charles O. Finley. Few owners have had a more profound influence on the game than this man. Unfortunately, not all of his influences were positive. At best, it was a mixed bag…

For two decades the mercurial Finley owned the Kansas City and Oakland Athletics. Finley was born into poverty near Birmingham, Alabama in 1918. At 15, his family relocated to Gary, Indiana, where he was active in sports and worked in a steel mill. In 1942, he became an insurance salesman, and  found his true calling doing so. He was also a player/manager of a semi-pro baseball team for several seasons before becoming ill with tuberculosis. He spent 2.5 years in a sanitarium regaining his health, and while there, he came up with the idea of selling disability insurance to doctors, an idea which made him fabulously wealthy before the age of 40.

With the resources to do so, Finley determined to purchase a major league baseball team. After several failed tries in the 1950’s, in 1960, he paid $1.975 million to purchase a 52% interest in the Kansas City Athletics from the widow of Arnold Johnson, becoming the team’s principal owner and chairman of the board. He bought a moribund team that did not draw well, and he knew that things had to change. He changes the team’s uniform colors from their traditional blue and gray to Kelly green and gold with white shoes, creating a garish ensemble. He introduced Charlie O the mule, permitted a herd of sheep to graze beyond the outfield fences, and installed a mechanical rabbit behind home plate to hand balls to the home plate umpire.

He extracted a new lease from the city of Kansas City, and then began dropping hints that Kansas City was not a large enough market for his team.  He regularly threatened to move his team, and signed a lease for a stadium in Louisville, Kentucky, the other American League owners refused to approve the relocation by a vote of 9-1, Finley being the only vote in favor.

Finley signed a new lease in Kansas City and then sued to reclaim rights to the earlier lease, which included an escape clause. He then announced that the franchise was for sale and drew offers from Denver and San Diego. With so much chaos, American League president Joe Cronin promised Finley that he could move within three years.

During the team’s final years in Kansas City, he suffered through very rocky relations with his players, who revolted against a fine against pitcher Lew Krausse. Ken “Hawk” Harrelson, one of the A’s better players, called Finley “a menace to baseball” and was cut for being a ringleader of the player revolt. Manager Alvin Dark was fired for not disassociating himself from the rebel players. Finley ended up being dragged before the National Labor Relations Board as a result of his atrocious conduct.

Major league owners approved Finley’s proposal to relocate his team to Oakland for the 1968 season and promised Kansas City a new expansion team to soothe the city’s hurt feelings. That did not stop U.S. Senator Stuart Symington from calling Finely “one of the most disreputable characters ever to enter the American sports scene.”

Not long after the team moved to Oakland, it began winning regularly. Blessed with one of the best lineups of the 1970’s, the A’s won American League Western Division title in 1971 but lost to the Baltimore Orioles in the American League Championship Series. They then reeled off three straight World Series championships in 1972, 1973, and 1974, establishing the team as a dynasty that featured future Hall of Famers such as Reggie Jackson, Jim “Catfish” Hunter, and Rollie Fingers, and also featured such other talented players as Sal Bando, Vida Blue, Bert Campaneris, and Joe Rudi. The A’s of the mid-seventies were as good a team as ever graced a baseball diamond.

Not even a winning team helped. Finley still engaged in ridiculous stunts like paying his players to grow mustaches, silly promotions, and lots of conflict with his best players. He introduced orange baseballs, and signed a world-class sprinter named Herb Washington (who had no prior baseball experience) to serve as a “designated runner.” Nothing had changed—only that the A’s were a better team. He constantly complained that the team could not survive in Oakland. And, worst of all, Finley was the primary sponsor of the adoption of one of the worst things that has ever happened to the game of baseball: the designated hitter.

Finley hinted that he was considering moving his team to Toronto or Seattle, he went silent for a while. However, in 1974, even while headed for the team’s third straight world championship, Finely began romancing potential buyers from Toronto and Denver while slashing employees and budgets, cutting back on ticket plans and promotions to bolster his arguments about the financial illness of his franchise, and then went on national television during the 1974 World Series to criticize Oakland for not supporting his team well enough.

After the 1974 World Series, Hunter was declared a free agent because Finley had failed to set aside part of the pitching star’s salary in an annuity, as required by his contract. Hunter then signed a lucrative contract with the New York Yankees.  In spite of this loss, the A’s still won the American League Western Division in 1975 before losing to the Boston Red Sox in the ALCS. After the advent of free agency, and after failing to get rid of Commissioner Bowie Kuhn, Finley followed in the sad tradition of the Athletics: like his predecessor Connie Mack had done, Finley gutted his team before his best players could just walk away through free agency.

Finley tried to sell ace pitcher Vida Blue to the Yankees and Fingers and Rudi to the Red Sox for a total of $3.5 million, claiming he needed the money to sign free agents to rebuild his team. Citing the best interests of baseball, Kunn voided the sales, thereby enraging Finley, who called the commissioner “the village idiot.” He sued to force the deals through, but lost.

By 1977, A’s players were calling for the league to assume operation of the franchise as attendance dropped below 500,000 for the season. Their home, Oakland Stadium, was often called the Mausoleum for being so empty so often during games. In spite of the plunging attendance, Finley continued making money by selling off the players who did not leave via free agency (Rudi, Campaneris, Fingers, Don Baylor, and Gene Tenace were among the players who opted for free agency).

Oakland city officials refused to release Finley from his lease obligation to the stadium so he could relocate the team. At one point, San Francisco Giants owner Bob Lurie agreed to contribute cash and some home games at the Coliseum if it meant getting rid of the A’s, but the team remained in Oakland (and remains there to this day). Finally, in ill health and unable to continue the endless fight, Finley sold the team to the Haas family—owners of Levi-Strauss—on August 23, 1980. Finley’s tenure as an owner finally and thankfully ended twenty years after it began.

Finley lost most of his fortune due to bad business deals, and died largely broke of heart and vascular disease on February 19, 1996, three days before his 78th birthday.  Hardly anyone lamented his death, and even less missed him.

However, Finley left his mark on baseball and on pop culture. His stunts forever changed the face of baseball, as his mistreatment of his best players led to the free agency and inflated salaries that mark the game today. “His two-decade tenure as owner of the Kansas City and Oakland Athletics was one of the most erratic administrations in baseball history,” wrote one observer. “By the time he stepped aside, it was difficult to say whether he was disliked more by his players, other owners, the baseball commissioner, the fans of two cities or U.S. Congressmen.”

And for all of that, we hereby induct Charles O. Finley in the Owner’s Wing of the You Stink! Hall of Shame.

Now available as an e-book for Kindle. Click pic to order online.

With hundreds of articles, dozens of books, and multiple film, radio and television credits between them, Eric and Michael have extensive experience as guests/speakers. To book the authors either together or separately, please contact them via the CONTACT link above.